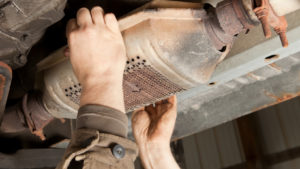 Recent reports have recorded an unusual surge in the theft of catalytic converters, and this baffled many because no one could understand why, of all things, would thieves be going after a catalytic converter? We are here to answer all this today, and what you will find out will wow you. So keep on reading.

This incredibly innovative method compels the chemical composition of such gases to modify before they vacate the vehicle. This procedure does bring the question of what its stem is that enables such complicated functionality. Surely, the things insider has to be something grand to make the process so successful. So without further ado, let’s dive into it.

What’s Inside a Catalytic Converter?

Picture a metal chamber that has little passageways. Many people also compare the catalytic converter to honeycomb for its several small passageways. However, this specific honeycomb is designed from ceramic-based composite and something you probably could never guess – loads of precious metals. Yes, you read that right. Now the theft makes sense, right?

When the exhaust gases run towards the honeycomb layout of a catalytic converter, they move through various passageways. As this transpires, a chemical reaction ensues that takes out all the toxic pollutants. Every one of these passageways has a metallic catalysts coating like rhodium, palladium, and platinum. These metals are responsible for the successful chemical reaction and ameliorating the NOx gases, carbon monoxide, and hydrocarbons present in the vehicle exhaust fumes.

These gases are extremely dangerous for your health, so getting rid of them is very important, and the catalytic converter does a fine job of that. The catalyst necessitates a big surface area, so a honeycomb design was the best choice for its construction.

Formerly, catalyst converters were not so grand because cheaper metals went into construction, so you never heard about thieves stealing them before. However, the cheaper metals, namely cerium, iron, nickel, fail horribly to do the job right and could not work well enough to convert the emitted fumes.

Therefore, due to the change in the carbon emission standard regulations, vehicle manufacturers had no option but to utilize the expensive metals in the catalyst converters. It was almost coincidental that palladium, platinum, and rhodium are ideal for reducing hydrocarbon and nitrogen oxide.

Why Thieves Love It?

So not only are the catalytic converters very easy to steal, but most importantly, those precious metals inside can bring a man some fortune. All the metals are rather expensive so getting their hands on the converter to get to the metals makes sense. Platinum is super expensive and can bring in some good bucks. Palladium can also go for around more than two grand per ounce. So we are not talking chump change here, and the money is big. Looking at these numbers, you can understand why the catalytic converter theft spiked recently.

Some reports even suggest that the surge in these thefts could also relate to the supply chain problem that made it difficult for dealers to get replacement catalytic converters via official channels. This could have created a black market. There could even be cases where stolen converters were transported illegally to countries, and then precious metals were recycled.

Types of Catalytic Converters and their Construction

We will look at the two main categories of catalysts and the precious metals that go in them.

1. Oxidation Catalysts
These catalysts incorporate palladium and platinum, so you know they are going to be extremely expensive. Every time carbon monoxide or some unburned fuel goes towards the oxidation catalysts, both of them transform into carbon dioxide and water.

2. Reduction Catalysts
Such catalysts encompass palladium and rhodium metals. So when nitrogen oxide and the fumes get to the reduction catalysts, they convert into nitrogen and oxygen. This is extremely critical for curtailing smog, for nitrogen oxide is among the primary smog elements.

There is no guarantee that the catalytic converter thefts will fully end but what you can do is take some steps to secure your car from the thieves. These preventive measures may be fundamental, but they can help you understand that replacing a converter can cost you money.

• Always park your vehicle in an area with good light and people passing by so your car will always be in view.
• Try to park your car in a locked or secure garage. We understand you might not always have the option to choose a public spot.
• Park the rear of your vehicle close to a fence or a wall. Do not make it quick for the thieves and give them easy access.
• Get the vehicle’s VIN inscribed into your converter’s casing.
• Ask your local garage to weld some bolts on your converter or utilize some other good anti-theft tools, which can make it difficult to take the converter out.

So what’s the takeaway from this? That’s right. Catalytic converts are extremely crucial for your vehicle and a very tempting object for crooks. Therefore, protection comes first: it’s better to safeguard yourself because replacing a converter will be a headache and financially exhausting. We hope this article informs you of what a catalytic converter has inside that makes it so essential and precious. Stay safe, folks!