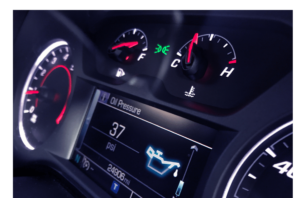 Oil pressure is one of those factors that need to be accurate for every car engine. If the oil pressure is very high or very low, then it is indicative of bigger problems. Hence, you need to keep a check on the pressure every time. Especially be very careful if you sense high oil pressure because there is definitely some problem that requires your attention. Therefore, it is a good warning. You should take immediate action because if you fail to act on it, it might result in a greater damage.

Your car engine needs to be lubricated properly, and the motor oil passes through various parts of the car. Hence, the normal amount of pressure is required so that oil can reach other parts. There is a channeling system in every vehicle, as there are small passages and channels, and the engine oils pass through them to lubricate, seal, and protect your automobile. But if these channels get constricted, the pressure will boost.

If something blocks the oil passage, it will cause a lot of damage to the engine and could result in a mishap. If the blockage persists for a longer period, then it might affect oil lubrication for the engine. Hence, if it goes unnoticed, it will cause many issues for the vehicle, such as leakages.
To prevent this from causing any more damage, ensure that you clean the blocked passage by taking the car to a repair shop. Do not try it out yourself, as this would lead to further complications.

When the oil filter gets blocked, the passages throughout your engine can be filled with dirt and other debris, leading to blocked passages. If this happens, then, unfortunately, there is no easy fix. You might have to flush the entire system to get all that grime out, but there is no assurance whether it will work. When the channels get blocked, the motor oil won’t pass through all the parts for lubrication. Therefore, this resistance due to blockage in the passages is one of the causes of high oil pressure.

If the filter is filthy, then the oil won’t be able to pass through because of all the dirt and debris being accumulated, so it prevents the engine from using oil. This would hinder the lubrication process. As a result, the car would have to exert more effort, which puts a lot of stress on the engine. This would lead to an increased temperature, further leading to high oil pressures.

5) Viscosity of the Oil

Lastly, the viscosity of the oil matters a lot, too. When the oil gets thicker (denser), it will be more difficult for it to pass through the channels, creating higher pressure. The oil’s viscosity matters. If it is more viscous or less, both can be a problem for the engine. The temperature of the engine is really important too as it has an effect on the oil pressure. When the oil gets heated, it will become thinner, and it thickens up when it’s cooler. The oil pressure in that engine would be much higher than a normal engine during its start-up.

Therefore, to gain an accurate PSI, it is suggested to wait for about 20 minutes once the engine has been started. If the PSI reading is above 80, then it is considered too high. It is indicative of an unsafe engine as the oil cannot pass through all the passages to reach all crucial parts of the car. With no effective lubrication, the engine can face serious damages such as wear issues due to friction. In certain cases, it may lead to engine failure.

Too much oil pressure will disrupt the healthy functioning of your engine. And with continuous high pressure, you will face a lot of difficulty in driving. With early action taken, oil pressures can return to normal. For that, however, you need to figure out what is causing high oil pressure.